The automotive channels on Youtube often seem to follow certain trends, like the recent one where several channels were combining old Ford Mustang bodies with new Mustang running gear.

The latest trend appears to be buying property and rennovating and building workshops.

It seems to be successful, as it makes sense that most fans of car rebuild and restoration channels enjoy the thought of a property partly devoted to cars.

Auto Auction Rebuilds might have been the channel that started the current trend.

One year ago Randy from AAR bought a very cheap property in country Oklahoma and first set about rennovating the home without actually intending to live there.

Over time his circumstances changed and he became a car dealer and used the property as the location for his dealership. He then built a large workshop and later decided to move in to the house to live.

Actually, Evan Shanks might have predated AAR slightly with he and wife Victoria's purchase of their house, garage upgrades and their more recent workshop build.

Goonzquad has been almost exclusively posting about their recent purchase of a house in the mountains in Chattanooga. They bought a partly completed house on a large property and have been making it habitable, clearing the land and are planning to next build a large workshop.

Drifter Taylor Ray recently shared his plans to buy his own property to live in and have a workshop to build and maintain his cars and trucks. So far he found what looked like a great property in Orlando but the purchase fell through at the last minute when the seller changed their mind.

California-based Youtube, Dustin Williams, also just bought a house and is in the process of renovating and has plans to build a large workshop.

Kondor Buildz bought a used paint booth from a prison a long time ago and we never heard about it again until today when they posted a video about their plan to build a new workshop and finally install the paint booth. Their video showed the start of construction but not much detail on what their plan was.

They haven't started building anything yet, but BackYardBoyz have bought some land that they plan to build their workshop on.

Finally, honourable mentions to two much smaller Australian channels. El Heffe's Chopshop has posted a few videos on restoring his house and more recently posted a video of building his dream shed, and JAMES NOLLAND posted about buying a house with a large garage and bigger shed with a hoist.

Most of these channels are asking their subscribers if they want to see more of the property videos and people are obviously responding enthusiastically as there are more and more videos and other channels are venturing into this area. 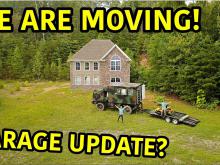