As avid watchers of car classifieds (event when not buying or selling) we see lots of mistakes when people are selling used cars.

Here are our top 5 tips:

As they say, you only get one chance to make a first impression.

Unless you’ve got something exceptional and rare you are best pricing your car similar to other comparable cars for sale.

People don’t usually pay twice the going rate just because you have very low mileage or some rare feature.

We’ve seen cars that were priced initially too high sit on the market for a long time, and the price regularly reduced to the point where they are now a bargain that should be snapped up. But they still don’t sell.

We don’t know the reason, but we suspect that once buyers have ruled out a car, they don’t waste their time reviewing it as an option a second time.

4. Cars without registration or with damage are worthless

Buying a car without registration is a pain. You might not be able to test drive it and you either have to trailer it home or get some sort of temporary permit (if your state allows it). Then it may need unknown repairs before it can be re-registered.

In NSW registration can cost close to $1,000 and then you have transfer charges on top of that.

As a seller, if you are selling an unregistered car you need to price your car well below other comparable registered cars.

In some states, you can register for 6 months instead (cost in NSW is around $500 or less), and this will make your car much more saleable and in most cases you would recoup at least this cost in an increased sale price.

At the very least, consider getting a registration inspection (NSW pink or blue slip) done to minimise the perceived risks for potential buyers.

If selling a damaged car or one with a major problem like a head-gasket failure or bad automatic transmission, you need to price it very low.

It isn't enough to price it at market value less the expected cost of repairs. Anyone wanting to take on the car will only do so if there is a significant cost saving to make it worthwhile for them.

3. Advertise in the right places

Facebook Marketplace is pretty hot right now, but it isn’t the first place a lot of people would look for a used car.

Carsales is number one, but because of the cost, a lot of people don’t list there. Due to Carsales market share, we would say it’s worthwhile to advertise there but it isn't the best choice for cheaper cars (although it is now free to advertise cars under $3,000).

Gumtree is the best of the free classifieds by far, and it is very worthwhile advertising there.

eBay is no longer a major player in automotive classifieds and not worthwhile unless you particularly favour an online auction format, although you would not expect to get a better price this way unless you were selling something fairly unique with an unknown value. You should probably link to your auction from additional Facebook Marketplace and Gumtree advertisements to make interested people aware of your auction too.

The rest of the general automotive classifieds are mostly a waste of time, unless you’re selling something rare or exceptional then you might possibly find a specialised website, forum or Facebook Group that may be worthwhile.

Don’t spam. Some people post their listing in every Facebook group they can, regardless of whether the group has any relation to what is being offered. At best you are wasting your time. At worst, you may get some negative comments that might influence prospective buyers.

We’re not sure that it’s worthwhile to drive around with a for sale sign on the side of your car, although for some cars and in some areas, it may be beneficial to park your car in one of those known local roads where everyone selling cars parks, as people do like to buy local. This is more likely to suit cheaper run-around cars.

Do you really want to waste your time with buyers who came to look at your car expecting something else so they walk away?

It’s better to accurately describe the condition of the car and mention any significant faults or damage. We’re not suggesting you write down every fault. People expect a few minor problems with a used car but mention the deal breakers, like significant mechanical faults or accident damage.

Some people leave out the car’s mileage if it’s higher than average because they don’t want to scare off potential buyers. They are going to find out anyway. Sure, if your car has high mileage but has been exceptionally well cared for then write about all the good things before you mention mileage, but don’t bother hiding the facts.

Conversely, write about your car’s good points (hopefully it has some). If you have spare keys mention how many keys it comes with. Same with any owner’s manuals and documented service history. If you’re the first owner mention that too.

A good, detailed description gives people the impression that you are a caring owner, which can make a difference to many buyers.

We see so many advertisements where people put little to no effort into presenting their car at its’ best.

Before you take photos take out any rubbish, ornaments hanging from mirrors, phone chargers and any personal possessions that you have on show. That includes cigarette papers that we saw in one recent listing, or even a dog sitting in the car that we saw in another.

If buyers see photos of a car that looks like it’s been trashed they will move on to the next one.

We recently saw a Mercedes advertised and the photos showed the sorts of rubbish you would expect to find in a family transporter, and the seller put no effort at all into presenting their car for sale. They were very honest in their listing text, saying that the car had basically been destroyed by their children through regular use. Guess what? It’s still on the market months later. It didn’t help that they overpriced the car too.

We’re all for honesty (see #2), but by not showing the car in its’ best state, this seller turned away any prospective buyers.

You should also make sure that engine fluids are topped up and clean where possible. You don’t want a seller checking the dipstick and finding it on the low-level mark, or finding rusty brown water in place of coolant. 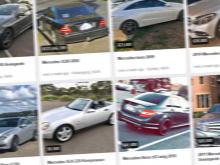