In my last post 3 weeks ago I posted that the idle and stalling issue had been solved - one of the greatest days of my life.

But 24 hours later the car started acting exactly the same again. I don't know whether my test drive wasn't long enough to induce the problems or whether the new sensor solved the problem temporarily only.

I tested again with the garden hose and was able to make the problem go away for a moment.

My next suspect was the wiring to the crankshaft sensor. Maybe the water was causing a temperature change or maybe it was conducting electricity. I had also picked up the plug and wiring when I bought the second-hand crank sensor from the wrecker previously so I spliced that in. Still no change.

I wasn't sure what to do next but I went down a few paths. I thought maybe the PCV again and even tried disconnecting the electrical connection to the PCV system which I believe is a heater. No change, and I went back to the wrecker to get a cheap second-hand oil filter housing/PCV but they didn't have any decent ones.

Next I convinced myself that the throttle body could be faulty as many people had suggested that it was the most likely cause -- even the person I bought the car off. So I bought a second-hand throttle body off eBay and fitted it and, once again, no change.

I repeatedly confirmed that the cold water on crank sensor temporarily made the problem go away so I thought I should try a new crank sensor, even just a cheap one off eBay.

I also theorised that it wasn't a temperature-related electrical fault, but maybe something was expanding and contracting and the clearance between crank sensor and flywheel was going wrong.

I looked again at the old crank sensor and noticed that although it didn't have any obvious wear it does have a tiny hole or maybe a small crack. Maybe it was getting too close to the flywheel?

So before I ordered a new crank sensor I added a very thin washer to raise the sensor up very slightly (maybe 1mm or less). The sensor is only bolted in on one side so I'm not sure how well this is going to work, but I've been for a reasonable test drive and I can't get the problem to occur.

I'm not getting my hopes too high because last time I replaced the sensor it was okay for the first couple of drives so maybe I am just disturbing something and not actually fixing the problem, but I am really hoping this could be it. At least I'm fairly confident that I am on the right track. 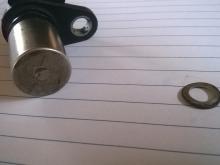 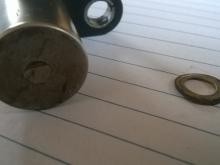 Like Watch Report
Next post: The end to two problem-free months with my Volvo V50
Previous post: Update #9 on the project Volvo V50 - one problem solved (10 to go)

I found lots of posts about Nissans, and then one particular forum thread about Volvos. The thread talks about problems due to either leaving out one of the bolts holding the transmission to the engine or not cleaning the mating surfaces. Something to do with grounding or magnetic fields.

I've been for some longer drives now and so far I haven't had any further idle problems or stalling. It's looking good.