I have noticed for quite a while that our C200T has been making quite a bit of noise, particularly at startup.

It seemed exceptionally bad when I last drove the car so I thought it was time to investigate. The problem was very obvious when I opened the bonnet - the water pump pulley was wobbling around a LOT with the engine running. With the engine off I could feel a lot of movement in the pump.

So I ordered a new water pump (Gates brand) and some Nulon long-life green coolant concentrate. Although most people say to use Mercedes coolant or Valvoline Zerex G05 (but Valvoline's website says to use G48), the Nulon product is a HOAT type coolant and Nulon's website says it is suitable for the M111 so that's good enough for me.

1. Drain the cooling system. There is a drain plug on the left side of the radiator that you can drain over 4 litres from. I also read there is an engine drain plug but I didn't use that.

3. Turn the serpentine belt tensioner anti-clockwise to release tension and remove the belt (make sure you note the belt's path first).

4. Loosen the three water hoses that connect to the water pump. The hose that goes to the thermostat housing will be easier to take off later but you can take off the other twonow. Some more coolant will likely come out.

5. Remove the eight bolts that secure the water pump. Some are 10mm femaile Torx, some are 12mm, and there are different lengths so ensure you note which one came from where. I pushed mine into a piece of cardboard with the layout drawn on it.

6. Remove the water pump. More coolant will probably come out.

7. Clean up the surface and install the new water pump and paper gasket. First connect the thermostat housing hose then use a couple of bolts to locate the gasket and start bolting in the pump. It's usually best to tighten a bit at a time in a star pattern. The 10mm bolts should be tightened to 10Nm and the 12mm bolts to 25Nm. My torque wrench doesn't go down to 10Nm so I just tightened by feel.

8. Connect the other two hoses and tighten all the hoses.

9. Put the water pump pulley back on (10Nm) and the serpentine belt.

10. Make sure you tightened your radiator drain plug and add water or coolant to the overflow tank until at the right level. Run the engine with the heater on and check and add coolant until the level stabilises. Run the car long enough for the thermostat to open and keep checking the level.

My old pump was real bad and there was lots of scoring on the inside from where the impeller had been rubbing against the housing. There was bits of metal on the outside of the pump and in the coolant.

I've still got to do another drain and refill (or two) but the new water pump is much quieter and there were no new leaks. The radiator drain plug was already leaking a little so on the last fill I am going to add some teflon tape to see if that fixes the leak. If that doesn't work I will try and epoxy the drain plug and use the bottom radiator hose for future draining. 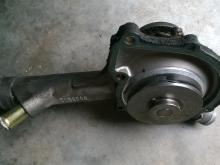 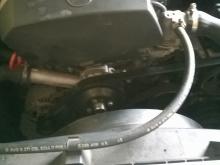 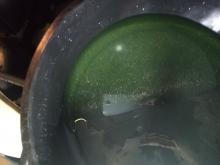 I ended up flushing the system with a garden hose and replacing the drain plug as one of the o-rings had disintegrated. 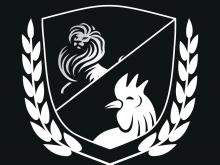