The rise and rise of the Ronald Finger YouTube channel

Two years ago Ronald Finger was publishing videos about his hobbies on his YouTube channel and had a subscriber count of under 2,000.

Then he found a 1985 Pontiac Fiero that had been sitting for 20 years and was in need of total restoration and published a couple of videos about bringing the car home and trying to get it running.

He very quickly gained tens of thousands of subscribers, all keen to follow the progress of the Fiero project.

Ronald had a little fun with his new subscribers when he left a post on his community feed thanking them but said that now that he had so many subscribers he was going to transition the channel to focus on the computer game Minecraft. Many subscribers didn't realise it was a joke and left some angry comments.

By the fourth video on the Fiero, and only three months after the first video, the channel hit 100,000 subscribers.

He then took a break for several months, later explaining that his absence was due to completing school.

The project started as just getting the Fiero running but turned into an almost full restoration, and after twelve months Ronald had amassed 200,000 subscribers.

Today, new uploads are highly anticipated by subscribers - all 250,000 of them as of the time of this post.

Despite having more subscribers than many full-time YouTubers, Ronald publishes new videos infrequently, usually releasing a new video each month.

His success is due to the quality and entertainment value of his content. The editing is well above the usual YouTube standard and each video is narrated and includes plenty of humour, and sometimes there's a little acting scene thrown in for good measure.

Car enthusiasts appreciate following the detailed restoration process and that Ronald is learning all aspects of car restoration as he goes. His videos frequently include things going wrong and having to keep trying until he gets it right (or close enough to right).

You can find his channel at www.youtube.com/channel/UCgvRHIimO6otkQ4Dcl_9YqQ (maybe it's time you got a proper channel URL, Ronald).

In my opinion at least, his videos are far superior to many of the channels with millions of subscribers and he is well-deserving of his success and many times more. Well done Ronald!

Special mention to another Fiero-based channel, Lightspeed Fieros. This channel also produces excellent quality videos and recently got their longtime LSX-engined Fiero project on the road. Despite quality editing and content, this channel has only a few thousand subscribers. Yet another YouTube and the YouTube algorithm mystery. www.youtube.com/channel/UCcntHebs-_jiuYiTMo0_v5A 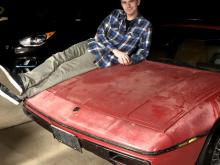