Update on the project Volvo V50

I've lost count of how many times I have had to remove the intake manifold from this car but today I did it yet again so that I could get access to the VVT valve to try cleaning it.

I followed the Volvo instructions to remove the valve this time - use a screwdriver to pry it out and don't twist it - and it came out reasonably easily.

I ran through part of the test procedure but the valve seems very clean already. I could see no trace of dirty or blockages and air flowed through it fine and it moved when I applied power to it.

The only possible issue is that when measuring the resistance between the two pins it showed 4.5 ohms. I have read that it should show high 3's.

I also wasn't sure if I might have damaged it by twisting it when I first attempted to remove it before I found the Volvo instructions. The holes on the outside don't line up fully with the holes on the inside.

For now I have put it back in and might look for a used valve - one that I can measure at the wreckers yard first.

After putting everything back together I did a final check around and happened to notice that the water hose to the thermostat housing appeared to be coming off.

This was a hose that I had replaced a few months back, and one that I had meant to re-check the hose clamp was tight later (never did).

I removed the airbox to gain access and found that the hose was coming off and that the clamp was only just holding it on. I've refitted it in a better position and will try and remember to check it again soon. I'm a bit worried that it might leak as the hose clamp seems to have cut into the pipe a bit and there was some coolant dripping from the hose although I hope it was just from disturbing it. Time will tell.

It's all back together now, fault codes cleared, but of course the fault code returned. 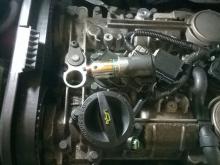 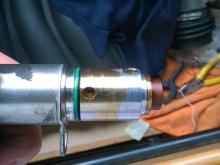 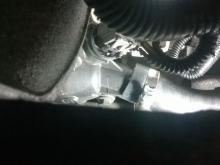