A 2.4-litre 4-cylinder engine was available on some models, and uses a timing belt which requires regular replacement.

There are significant reports of 3.5-litre engines failing. They suffer from excessive oil consumption, engine electrical problems, and are very heavy on fuel. They also require regular timing belt replacement.

Later petrol models had Alloytech engine from the Commodore, which are more economical but also have issues including timing chain stretch.

Diesel models are a little better on fuel but also have reliability issues. 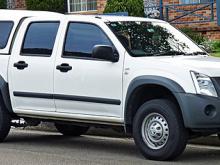