To celebrate Motor magazine's 50-year anniversary, they took two Holden Commodore's on a non-stop journey around Australia on Highway One, a total of just under 15,000 km.

They did the same journey 25 years before in a Ford XD Falcon and they hoped to beat that time and make the trip in less than seven days.

The article, titled "Far Lap", was published in the June 2004 issue.

The Commodores were VY generation V8 SS models and each included a few modifications for the trip: a bull bar, four large driving lights, a sump guard, smaller 17" wheels in place of the standard 18" wheels, three spare wheels, and an extra 65-litre fuel tank for a total of 140-litres. The expected fuel range was 1,100-1,200 km between refills.

The primary car comprised journalists Jesse Taylor and Dean Evans and photographer Thomas Wielecki. The second car, which followed as a support vehicle, was driven by Paul Cockburn, Marcus Hofmann and John Mahoney. Drivers would drive and sleep in shifts, with only scheduled stops for refuelling.

Against convention, it was decided to run anti-clockwise in hope of avoiding road closures due to a cyclone.

The cars set of on 25 April from the General Post Office in Sydney at 4 o'clock in the morning.

Drivers adhered to speed limits but there was 2,100 km of driving on the unrestricted highways of the Northern Territory. There they were able to drive at around 170 km/h during the daytime, with runs often over 200 km/h, and setting a top speed of 240 km/h.

There were few problems along the way and the cars proved to be reliable. At one point they took a wrong turn and had to turn around after a few kilometres but the biggest issue was that one of the roads in Western Australia was closed due to the cyclone.

They opted to spend a night in a hotel, rather than take a long detour and deviate from the planned route in hope that the road would reopen which it fortunately did early the next morning.

Coincidentally the 1979 run was also affected by a road closure due to a cyclone close to the same location.

During night time driving in some areas, their speeds were significantly limited by a large number of animals on and surrounding the road. This included the Nullarbor crossing, where they slowed to 90-100 km/h for safety.

One of the cars did hit a kangaroo but the car only suffered minor damage to the bull bar and spot lights.

The previous run was documented in Modern Motor's June 1979 issue. If I can get hold of a copy I will update this post with details of that journey. 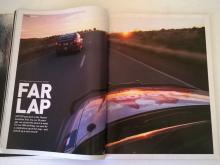