How (not?) to replace transmission shifter bushing on a Mercedes W202 C-Class

Our year 2000 C200T (wagon) with 722.6 5-speed transmission was having trouble starting. After much frustration, I started suspecting the gear position switch was the cause, as when it wouldn't start it often showed the wrong gear on the dashboard and would often start if the gear lever was moved around a bit.

I dismantled the shifter assembly to check the switch and found that the shifter bushing was completely missing so the gear level was very sloppy and was now the prime suspect for the starting issue. Had I done some research first I would have seen that the shifter bushing is a very common problem, although it is not usually linked to starting problems. I'm guessing this might be more of a problem with late-model 202 5-speed transmission models.

I ordered the part for A$2.20 plus shipping (part no. 1159920310) and attempted to fit it when it arrived but it does not go in easily. After a few YouTube videos I used a bolt to press the bushing into place, which worked very well.

The next challenge was to get the clip into place. The new bushing is wide and does not compress easy which makes it difficult or impossible to be able to refit the clip. I read that someone uses a belt sander to make it fit easier, so I did something similar -- I used a knife, file and sandpaper to remove at least 1mm on each side of the bushing. It was still a tight fit, but I was able to get the clip started and then used a pair of pliers to push it all the way into place.

So I installed the bushing from the top, having removed the shifter mechanism, but it is also possible to install it from under the car.

Access is much better from above, but once I put it all back together I had trouble selecting gears and the gear indicator would not show the correct gear. I soon realised that the shifter assembly needs to be carefully positioned to work properly, and aligning it correctly took several attempts.

Installing the bushing from under the car would prevent this problem, but I would imagine that it is difficult to remove and refit the clip, and once the bushing is installed it would also be difficult if you did need to shave it down if needed.

If you do decide to do the job from inside the car, here are the instructions for getting access to the bushing:

* Remove the shifter surround panel that houses the window switches by simply pulling it up from the front.
* Remove the small tray from in front of the shifter -- it just pulls up and out.
* Remove the centre console. There are two screws inside the console storage box and two under the ashtray at the front.
* You may need to remove the gear knob to remove the console (rotate the bottom part of the knob anti-clockwise and pull the knob off) or there should be no need if you put the car in neutral.
* Remove the two hex screws at the rear of the shifter mechanism and one at the front (you do not need to remove the Torx screws)
* Disconnect the locking cable that is at the front right of the assembly. It rotates to the left until the small key aligns at the top.
* The shifter assembly should now come off. It has a rubber seal that may be stuck a little so you may need some force.
* The electrical plug is a little difficult to remove but you may need to disconnect it for better access.
* To remove the bushing clip, you push down on the top part of it and then it slides out of position.

To install the new bushing used a bolt and washer on one side, and a socket, washer and nut on the other side, and tightened it until it went into place. I added grease to the hole which makes it easier.

To reinstall the clip, you just align the side where the metal is folded so that the bottom part aligns to the groove in the shaft and then push it into place until the top part clips down into place. Have a practice first without the bushing and it will make sense. 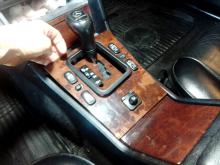 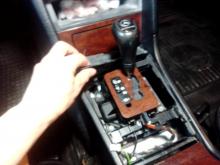 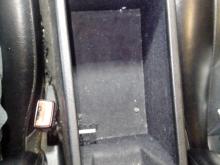 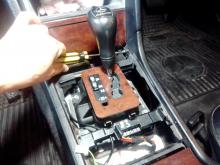 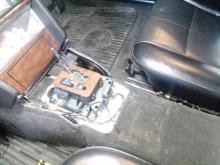 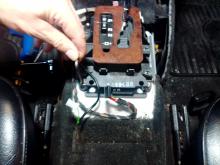 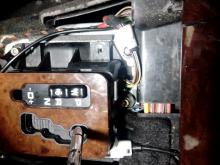 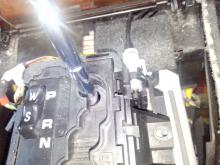 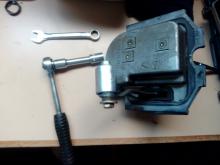 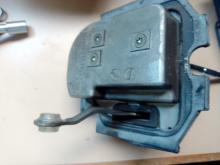 It turns out the new bushing did not solve the problem and there is a fault with the circuit board. When it is cold it won't show the correct gear, but it is better when it gets hot. This sort of fault is not uncommon with electrical components.

Knowing this now, if you don't want to change your bushing from under the car, I would say it might be easier to do from above.

For an update to my electrical fault, see my new post:
www.motortraders.net/posts/1793-how-to-disassemble-the-mercedes-5-speed-automatic-shifter-mechanism