I originally posted this 3 years ago on quora.com as an answer to the question "Have you owned a Porsche (pictures appreciated)? What is the Porsche experience to you?". It describes the ups and downs of ownership of my 1983 Porsche 944.

As a car obsessed child I had always wanted a Porsche. In my mid-20’s, after owning several more sensible cars, it occurred to me I could afford to borrow money and buy a second hand Porsche.

I ended up buying an approximately 10 year old Porsche 944 - not quite the 928 I had wanted as a child, but still a Porsche! It cost about the same amount as money as I earned in a year.

I drove it to work each day (in heavy traffic) and for the most part I loved owning it and driving it.

It was an early model with the single-cam 2.5-litre engine and I found it a really torquey engine which responded well at low engines speeds, unlike the twin-cam Toyota I had owned previously. I do remember it being a bit tail happy in the wet if you weren’t careful.

While I owned it, it was reliable but did need an expensive timing belt service. It was a few decades ago now, but I don’t remember any breakdowns or repairs being needed.

After maybe a year it seemed to me I should get out of Porsche ownership while the going was good and get something a little more sensible and less extravagant that I wouldn’t worry so much about.

So I put the car up for sale.

Around this time, one of my younger work colleagues had just got his drivers’ license and for some reason I offered him a drive around the block in the Porsche.

He drove slowly and fine but failed to spot a concrete divider in the middle of the road, launching my car into the air and landing hard resulting in one of the front wheels/suspension parts breaking off and associated body damage, and cracking the engine sump.

Fortunately the car was insured (big excess though thanks to the age of the driver), but not all parts were available here in Australia, and I did not get the car back for two months. It did look great when I got it back though.

It might have looked great but after a week or so I was going around a corner and the steering jammed and the car continued to go right even when the road no longer went right. I jammed on the brakes and the car stopped within inches of another car who wondered why I was trying to drive into the side of him.

There was an hour long wait as the car sat in a busy intersection, during peak hour, waiting for a tow truck. I still remember someone yelling at me, “All show, no go!”

I got it back in a few days after a bolt in the steering system had broken or not been tightened or something, and I put it up for sale again.

I continued to use the car while waiting for a buyer and on one Sunday I parked the car at a busy parking station. The next day one of my work colleagues (the same one actually) asked what happened to my car, and pointed out the big crease down the side of the car. Someone must have parked next to me the day before and when reversing out, there car must have run up against mine almost from one end to the other.

I didn’t want to claim again on insurance and got a few quotes to have it repaired but it was a considerable amount.

I opted not to get it repaired and after a long time trying to sell the car, someone came along and looked at the car, didn’t want to test drive it, didn’t mind the damage, and paid the price I asked (which took into consideration the damage) without quibbling.

That was over 20 years ago now and there has been no more Porsches for me. I would still love an early 928S 5-speed though.

Here’s a photo of a similar car as I don’t have any photos of mine. Mine was a silver 1983 5-speed model with the “cookie cutter” wheels.

And I think this is the offending concrete divider, found on Google Maps, although I thought it was taller… 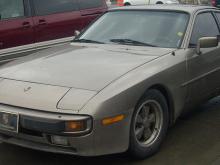 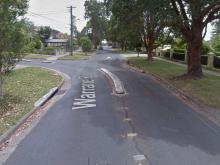