Built Official (www.youtube.com/builtofficial) is an automotive YouTube channel with over 300,000 subscribers that has been posting regular videos up until three months ago.

The last video was posted on 14 June 2022 and the channel's other social media has been similarly quiet.

So what happened to Built?

There is no information on the channel's community page or other social media and Kaleb, the channel's creator, has not posted on his own own Facebook page for nearly two years.

In the past the channel was hacked but was later restored, but there's no sign of this having happened this time.

After a little more social media stalking we can see that the Kaleb's house was on the market since late July and is now under contract.

And if we go back to October last year we find an announcement of Kaleb's wife being pregnant with their third child. Add nine months and that would be June 2022 - around the time when the videos stopped.

So although there has been no official announcement to subscribers and followers, most likely the channel is on hold while Kaleb is kept busy with a new baby and possibly a move of house. 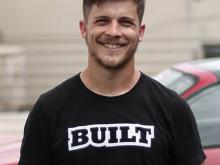