The 325i is now finally registered in NSW so I was able to go for a short drive today.

The engine sounds great and mostly runs well. The idle is not bad but is a little irregular at times. It is powerful at the right revs but lacks a bit down low in the rev range.

It is difficult to take off without shudder from the clutch. The gear change is good.

The suspension is soft and the steering not so precise. There is some looseness in the front end, perhaps a ball joint.

I thought I would try and sand an area where the clear coat had peeled to see if maybe I could sand it back then reclear-coat it. I don't think this will look good, however.

I also gave the car a wash and wax and pulled off the wheels to check a few things.

I also had a look at some of the problem areas of the body.

There is some rust just above the rear bumper bar. Upon removing the seal there is some minor rust in sections all the way along where the metal joins. There is also some bubbling in the horizontal section.

There is also some rust above the front windscreen. Just a little bubbling is apparent, but who knows what lies underneath.

And some more rust just below the front windscreen.

Inside the driver's door jam is some sign of rust. It is probably minor.

The battery is mounted in the boot and the metal under and around the battery has rusted badly and with the weight of the battery the metal has torn in a couple of places.

There is a strange plastic panel screwed and silicon-sealed in to place under the battery area. I wonder why this was done?

Controlling the central locking from the boot lock wasn't working, turned out to be the usual wiring problem. I soldered the wires together and problem solved. 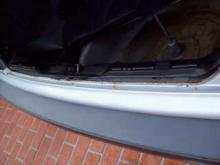 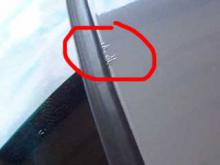 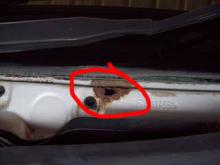 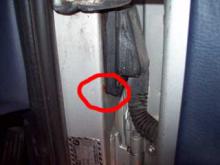 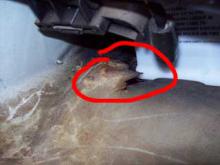 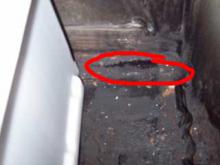 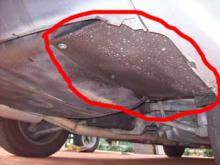 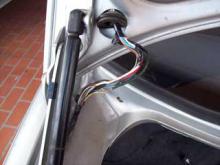