It has been two months since I bought this written off car, which I planned to remove some parts for myself and sell of the rest for profit.

Items that went quickly were the centre arm rest, 17" wheels, climate control module, and many of the exterior lights.

I still have the seats, probably because I have tried to sell them for top dollar. The door trims went after a long time and many failed offers.

My pricing strategy has been to sell things less than anyone else (except the seats and door trims) as I just want to get rid of things as quickly as possible. However I haven't sold many body parts even though I dropped my prices to ridiculously low prices.

I have now removed almost all of the parts that I can store and should be saleable, except some of the body parts like doors. Everything else will hopefully soon be picked up by a scrap metal merchant. I might even get $100 for what's left.

I found the engine was belching blue smoke every time I ran it and I didn't end up finding the cause as I started selling off parts which made it impossible to run the engine again. So I'm not selling the engine but will instead dismantle it mostly just because I would like to see how it comes apart.

The transmission was too much trouble to get out myself and noone has shown any interest in it so it will probably go with the shell.

The worst part about this project is the number of calls and messages I get that are a waste of time. People asking about parts then eventually telling me what model they have and finding out that the parts are not suitable. Or people who make an offer, I accept it, then I never hear from them again. Weird.

I have kind of enjoyed pulling things aparts and find out out how to remove things with little regard for if I break something.

Would I do it again? I would say no, but then if I wanted some of the parts myself then I might be tempted. 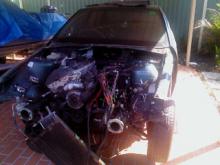 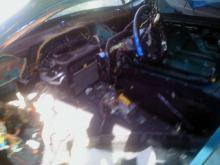