The instruments in my 1991 E36 BMW 325i intermittently stop working. Usually it happens when I operate some electrical equipment like the wipers or press the brake pedal and activate the brake light switch.

I presumed the problem was a bad ground or a bad solder joint somewhere (cold solder joints seem to be fairly a common problem) but when I first looked for these problems I found no sign.

I was recently able to try another instrument cluster out of my parts car which worked fine and confirmed the problem was in my instrument cluster. I couldn't just swap clusters because my parts car was a four cylinder instead of six so the rev counter was out, and it was showing 290,000km instead of the 200,000 that my car has actually travelled.

A little online investigation led me to this post on bimmerforums.com where someone found the cause of the same problem. However they didn't provide much instruction on how to locate, disassemble and fix it.

I just completed this repair myself and can offer some further guidance. I suggest you look at the photos in the above link to get an idea of where the component is located.

The problem area is on the back of the main instrument cluster circuit board. To reach this part you really need to remove the plastic back panel but this is permanently sealed by melted plastic. You could drill out these plastic parts but I think the best solution is to just cut through the back panel in the right area.

I decided to use a large drill bit and drill a few holes until I thought I had enough access. You really need to be careful doing this as my first hole resulted in the drill going too far and damaging the circuit board.

Once I had four large holes drilled I cut out the joining pieces and had a large enough area to solder the suspect connections to an electronic component called a crystal. It's easy to just heat the leads with a soldering iron and apply a small amount of solder to fix these bad solder joints.

Unfortunately for me, due to my poor drill control I also had to fix the circuit board. This involved soldering some wires to join where two circuit board tracks had been damaged. I also had to drill a couple of extra holes to gain more access to do this.

As you can see in my photo it is a bit of a mess, but if you are careful with your drilling then it is an easy job to just touch up the two solder joints. After testing and before installation I covered my exposed work with some hot glue and covered the hole I made with the drill.

So far it seems to have fixed the problem so it looks like this is the usual cause of this problem.

Update: the problem has reocurred so I suspect there are other bad solder joints. I will have to pull it apart again and check all solder joints. 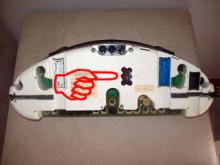 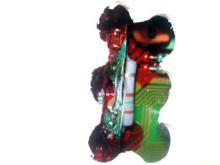