It had been for sale for sometime, and as I hadn't any idea what I would replace it with, I was in no rush to sell it.

But it would have been a mistake not to sell it when the opportunity arose.

So with a small financial loss (if you don't take registration and insurance costs into consideration), money changed hands and I listened as the new owner drove it away, already missing the fantastic noise that the M50B25 engine makes.

Now I am car-less and not too sure what to buy.

Of course another 3 series is my first choice. The only issue is that I would like a station wagon for a bit of extra load carrying ability, but the only 3 series wagons sold in Australia are E46 and E90's, both of which are considerably more than I want to spend on a car. It would be nice if at least the E46 sedans came with folding rear seats (some did but not sure if any Australian models did).

Still I am considering a 3 series, either another E36 318is (my number one choice for the most reliable and low maintenance 3 series). My ideal model would be another 1997 4-door, with manual transmission and preferably in silver with no sunroof or cruise control and a black interior.

Another option is an E46 although not many are in my price range. For cost reasons I wouldn't mind a 318i as long as it was the early M43 engine. I know these have a few problems but they are a better choice than the later N42 "Valvetronic" engine. As long as it's manual I can live with the performance.

There is an E46 320i around my price range but every time I look at the engine bay of a six cylinder model I see a lot less room to work and a lot more complication. And an extra two of everything: two more spark plugs, two more coils, two more litres of oil, two more litres of coolant, two more hours of work to get better access...

Dare I admit to liking the late 1990's/early 2000's Volvo V40? This is another car on my list, although from past experience test-driving a few of these including a T4 model, the performance is not great and the handling nowehere near what I am used to with BMWs.

Well the search has started... 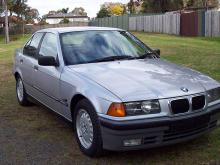