Starter motor problems for my 1997 BMW 318is sedan

Recently we have been having problems starting our 1997 BMW 318is sedan.

The symptoms are that the engine does not turn over but the starter motor does spin. However, it only happens sometimes.

I presumed the problem was the starter motor and found an inexpensive replacement (from an E46) at a local wrecker for A$60.

I was going to fit it myself but I read a few guides and found out that it was either a matter of removing most of the intake system, or getting to the starter motor from underneath the car and somehow manoeuvring it in and out and attaching the wires. It all seemed too hard and I decided to get a few quotes for the job.

I found a new garage at Girraween in Western Sydney called D & D Auto Services who could do the job quickly and inexpensively. Don there suggested that the problem could also be the ring gear but suggested seeing I already have the replacement starter motor that he fit that and see how it goes.

I was very impressed with Don's quick service and obvious expertise with BMWs.

The car was back within only a few hours and is starting normally again. 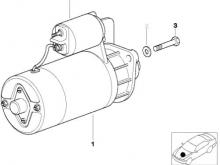