My Supercharged 318is updates

When I got home after buying my 1998 318is Sport, my wife, who had been following me, said that that when I accelerated hard it was quite smokey - although she couldn't tell me what colour the smoke was.

I was a bit worried that the engine might be a bit worn out, having had the supercharger fitted for at least 80,000km.

I also noticed when I had the windows open when driving, or when I got out of the car that there was a strong smell - the kind you get from running over rich I think.

Within a few days I had read the fault codes which reported a faulty air flow meter, oxygen sensor, fault with the ABS/traction control system, and air bag system, some "smoothness" issues between cylinders, amongst various other errors.

I discovered the car has a Unichip attached to the ECU, an enlarged 57mm throttle body, a Remus exhaust (at least rear section), and possible some custom centre section and catalytic converter. It also had some sort of oil cooler in front of the radiator which wasn't connected (since removed).

I swapped air flow meters with my wife's car and the error went away so ordered a cheap used replacement which has now been fitted.

I also replaced the spark plugs, swapped coils and plug leads but the smoothness issue did not change.

Over time the clutch bearing noise went away, so maybe it was due to lack of use. Also after the first few days I never smelt any fuel leak again.

I also had a wheel alignment done which improved the high speed steering issue, although it's still not 100% right. It looks like one of the control arms was replaced recently so perhaps the other one needs doing too.

After a bit of research about the Downing Atlanta supercharger kit, which I think mine is although it doesn't have the name printed on the manifold, I realised that my car had no crankcase ventilation valve. Also the pipe from the engine for the CCV valve was connected in front of the air flow meter instead of behind the throttle body.

Some time later, I found someone (thanks to Dave at Daves Metal Products) to make me an aluminium adaptor to refit the CCV valve and as soon as I fitted it and sorted out the plumbing the idle smoothed out, starting became instantaneous and the car drove better, smelt better and probably doesn't smoke any more.

Other changes since purchase are replacing the aftermarket radio with the original C33 type radio, removing the M3 badges (no more imposter), replacing various missing or broken minor parts, and I found a set of the original 16" wheels (which I haven't fitted yet).

Still to do are sort out the air filter. At present it has a very dirty looking K&N filter. Ideally I want to fit the original airbox and paper filter which I now have, but there are some issues with fitting this due to the angle and location of the air flow meter and the throttle body due to the supercharger. I did buy a K&N Apollo filter (which is a sealed cone filter) as a temporary measure but haven't been able to fit that yet due to needing more parts to mount it.

I also have to sort out my ABS/ASC issue (going to try new ABS wheel sensors), the airbag issue (passenger sensor delete) and I still have an oxygen sensor fault code and the smoothness issue. 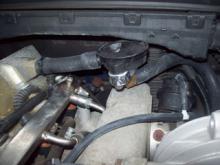 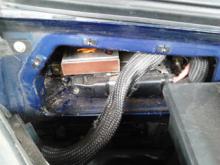 I finally had a closer look at the piggyback computer. It is not actually plugged in. It's a Unichip Engine Control Unit. I am trying to find out more about it and whether it is work reconnecting. 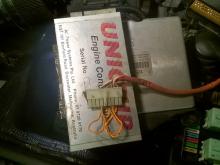