For some time I had noticed some noise from the rear of the car but it got to the point where I finally did something about it. I jacked the car up and could hear and feel the problem by turning the wheels. My regular mechanic changed both rear wheel bearings for me and the car is quiet again.

Then a few months ago I drove home from work and it happened to be raining, and it had been some time since it had rained in Sydney. Whenever the road surface was uneven the rear of the car would feel like it was slewing sideways. I pulled over to check if I had a flat tyre or something but couldn't see anything wrong. I continued on but the car was very dangerous to drive, and I ended up crawling home slowly.

I took advantage of a local mechanic's offer to put the car on a hoist and quote on fixing the car. He found that the rear trailing arm bushings were very worn and allowing large amounts of change to toe at the rear.

I bought a set of RTAB's and my regular mechanic fitted them for me. The handling was restored. However, when I took the car in for new rear tyres (Kumho KU21 A$240) and a four wheel alignment (A$65), they told me that the front lower control arm bushings were also worn. That's another job for the near future.

Over the Christmas break I also had a chance to rebuild the plastic air ducts and guards behind and under the front bumper. When I bought my car there were various parts inside the boot, rather than attached to the car where they should have been. My car has a factory front M3 style bumper but the centre lower air duct was missing. I couldn't find one second hand so I bought a second hand standard part and fitted that instead. I also refitted the brake cooling ducts. I was missing one of the "pork chops" - the pieces at the bottom left and right that are shaped like pork chops - but again I couldn't find the M3 style part so bought and fitted a standard part instead. Some of the splash guard mounting holes were broken so I had to resort to using cable ties to secure them in some places. It's all back together now and looks much better, but one day I must find some M3 parts to fix it properly.

While at a local self service wrecker's yard recently I found an E36 320i with Bilstein Sport struts and shocks and Eibach springs which all appeared to be in good condition. I removed them all myself and paid only A$188 for the set. As I was able to get the complete parts it was an easy job to install them in my car, although I did have a few problems: I didn't seat one of the rear springs properly, and I also broke a stabiliser bar mount. The car is now a little lower and seems firmer although there is a bit of noise from the rear which might be the rear shock absorber mounts. I will try new ones and see if I can find a set of the ZRM RSM reinforcement plates.

As I have previously mentioned here I have had some issues with the clutch, which is presumably the normal M44 type. I have looked into upgrading the clutch to something more capable of coping with the supercharger. On a recent long drive the clutch started slipping again whenever boost came on in top gear. Time to get this done.

After much research and indecision I have bought a second hand flywheel from an early non-VANOS E36 320i or 325i which also came with a good clutch and pressure plate (A$150). In fact the clutch seems so good that I will use it rather than buying a new one, although I do have to buy a new release bearing (A$54) as that didn't come with the parts I bought and the one in my car now is a little noisy. I also need to buy a clutch fork pivot pin as I understand these are made out of plastic and should be replaced with the clutch.

I should be able to get this installed in the next week or so, and will also get the control arm bushings replaced at the same time.

Overall I seem to have had more problems with my two 318is' than I have had with past BMW's, but considering that these cars cost A$500 and A$3,500 respectively, I can't complain too much. 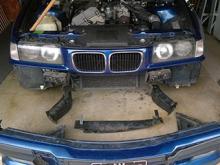 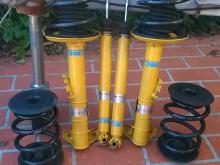