After several months of excessive noise due to the previously mentioned cracked exhaust manifold, my 1997 318is sedan is now fixed and quiet again.

I had previously purchased a second hand exhaust manifold (A$100) and had it fitted by my usual mechanic. At the same time he also replaced the rear trailing arm bushes (parts were A$90 from clickableautomotive.com.au) as I suspected these were worn and the cause of the rear tyres only lasting around 5,000km.

Sure enough, he said the RTAB's had separated into two pieces.

Looking at the old exhaust manifold I found that it had a couple of large cracks just inside the flange for the rear cylinder.

It has now had a four wheel alignment and I have treated it to a new set of wheel badges.

Now that this car has the worst of its problem sorted, it's time to get the new 6 cylinder flywheel and clutch fitted to my supercharged 318is. 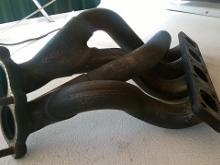