Fuel gauge problem for my BMW 318is E36 coupe

My fuel gauge in my 1998 BMW 318is coupe stopped working the other day.

My first thoughts were to check the sender which I believed was on the left side of the car, underneath the rear seat. I pulled out the seat base, removed the cover and used a multimeter to check the resistance of the sender. It showed a value which varied when I shook the car which indicated that it was working.

Time to do some research. The Bentley manual showed that the resistance I measured was correct but also showed a second sender on the other side of the tank.

I measured the one on the right side of the car and it was zero, and no amount of shaking the car would produce any resistance value on my multimeter.

After a little online research I found that the common cause was a faulty sender or a broken wire to the sender. By my logic and experience, senders usually don't fail completely but wear out in certain parts of their range, but as my fuel gauge hadn't worked for the last week at all, I assumed that the problem was most likely the common broken wire issue.

I stripped back the wire and soldered it back to where it had broken - probably not the best long term repair but hopefully good enough for a few more years. The best repair would be making a "mechanical" connection such as crimping or twisting the wires together as well as soldering.

Ignition on and my fuel gauge is working again. 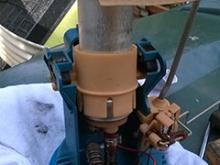