Last time I had a wheel alignment done the mechanic told me that my front lower control arm bushings were worn out and were in need of replacement. The ball joints and control arms themselves were otherwise in good condition.

Some time ago I ordered a set of new parts and when I took my car in for the clutch replacement I asked the mechanic to fit the new bushings at the same time. Unfortunately he didn't fit them as he said the control arms would need to come out so the bushing could be pressed on. However, I had previously changed just the bushings on my other 318is so I knew it was possible to replace the bushings without removing the control arms.

Having noticed some vagueness in the steering that is not typical of the E36, and also having experienced some vibration under breaking I finally got around to replacing the bushings last weekend.

Last time I did this job I used a grinder to cut through the old bushings and accidently cut into the control arm itself, so this time, after watching some videos of how to do the job, I had purchased a 3 jaw gear puller (A$22) in advance to use instead.

I did the job one wheel at a time. I jacked up the side of the car and put an axle stand under for protection and removed the wheel then undid the two 17mm bolts holding on the bushing "lollipop". Incidently, I had purchased the bushings complete with the brackets ("lollipops") so I didn't have to fit new bushings into the old brackets. It's about twice the price (I paid A$90 for the pair) but is much easier.

I cut through what was left of the old rubber bushings with a knife to remove the outer party of the bushing and bracket. Just a few cuts and some aggressive twisting was all that it took.

Next using my new 3 gear puller I tried to line up all three jaws and the centre part but this was very difficult. The video I watched prior suggested a 2 jaw puller but I went with a 3 jaw type, which probably makes this part of the job a bit more difficult. I used a centre punch to make a small indent in the control arm which helped a bit, but it took many attempts before I could get the rest of the bushing off.

I then cleaned up the control arm with some fine wet and dry sand paper and attempted to hammer in the new bushing after coating both sides with dishwashing liquid. Unfortunately I found it difficult to get it on, until a helper held a strap around the bushing and pulled it towards the front of the car whilst I hammered away. That worked! I used the old bushing to hammer the new bushing all the way in.

I secured the bracket with new bolts and washers, put the wheel back on and then moved on to the other side.

The other side went a lot smoother. For the puller to work well it needs a well placed indent made with a centre punch. I also coated the area with WD40 which I think made it a lot easier too. I was also able to hammer the new bushing on much easier, probably because this time I used a lot more force.

After a test drive I can confirm that both the steering and braking has improved.

On another note, two months ago I moved to the Blue Mountains area of Sydney and now have a 45 minute trip to work on fairly quiet highway. My fuel economy has improved dramatically and after each fill up I am measuring between 7.0 and 7.5 l/100km. 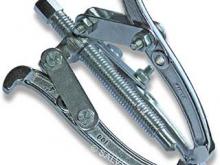