The airbag warning lights on both of my BMW 318is's have been on for some time now and, because I now have my 4-door 1997 model up for sale, I thought it was time I did something about it.

I had previously read the fault codes for both cars and the problem was the same for each: passenger seat occupancy sensor fault.

The correct fix for this problem is to replace the seat sensor mat inside the passenger seat, but that didn't sound too easy to me.

However, there is plenty of information available online for various BMW models on how to bypass the sensor.

There seems to be quite a few ways of doing this, using combinations of various resistors, diodes and capacitors, some in series, some in parallel. I settled on one that seemed to be the most popular and got a few Dollars worth of parts from the local electronics store.

I removed the little electronic box that is clipped into and located underneath the passenger seat (turn it until it comes out) and unplugged the two connectors.

I pried open the box and used a soldering iron to remove the plug with the blue and white wire, noting which way the wires were located.

I soldered a resistor to each end of the diode (doesn't matter which way around resistors go).

I used some heatshrink tubing (electrical tape would do) to prevent any exposed electrical parts (such as the resistor and diode leads and the plug I removed) from touching anything else and put it back together.

Unfortunately the airbag light won't go off until it has been reset. Fortunately I have the BMW software and a cable purchased off eBay that enabled me to do this. Now my airbag light is off finally!

What does bypassing the sensor in this way actually do? It basically fools the system into believing a passenger is in the seat. This means that even if there is no passenger the passenger airbag will still go off. This might seem a bit of a waste of an airbag but if I have an accident that involves the airbags being deployed I'm sure it will be the least of my worries. 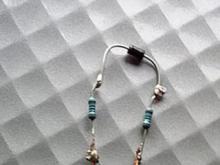 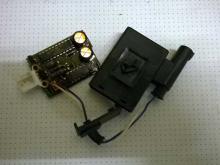 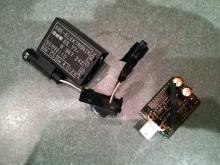 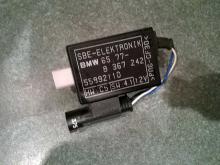