The ABS+ASC warning light has been stuck on in my 1998 318is coupe since I bought it. When I checked the fault codes the error was a fault with the pump unit.

I have looked into this problem a few times and I thought it might be one of the common problems reported online which is the connections inside the pump unit break and need to be repaired.

But after further research I found that my late model E36 has a different unit which is also fitted to some later E46 models. The part number for this controller is 34511164897.

I thought I had got lucky when I found a second hand unit of the exact same type at a local self-service wrecker's yard for A$55.

However, when looking for some instructions online for how to replace the ABS pump and controller I finally found some information on a common problem with this particular ABS+ASC controller.

Inside the controller there is a couple of solder joints which crack. They are for a connector which joins to the other part of the pump and presumably provide power to the pump motor.

The ABS+ASC controller is part of the pump unit but can be removed separately, which means there is no opening of any brake lines and need to bleed the brakes.

Once out I found that there was no way of removing the cover. Some people online had cut off and removed the entire cover but one person had cut out the cover only where the repairs need to be done.

At this point I just put in the new part that I bought to see if that would solve my problem. It didn't. I still had the same fault code (despite clearing codes) and a new code about a communication error. A bit more research revealed that the car needs to have a setting changed to work with a different controller, even thought it's the exact same type. I wasn't sure how to do that so I went back to trying to repair mine.

Using a knife then a drill (carefully) I cut out a small section of the controller's cover and then I could see that I did have this common problem of the broken solder joints. From my pictures below you can see where the right place to do this is.

I resoldered the joints, which is best done with a powerful soldering iron and, as a temporary fix only, covered the hole with duct tape. I plan to fill the hole properly with epoxy or something later.

Back in the car, which requires more moving of brake lines, codes cleared, and the light is finally off with no further codes reported. 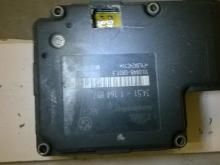 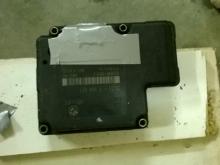