Improvements to my air intake system

Since I bought this car, the air intake system has been a bit of a mess.

Originally the exit from the PCV valve was routed to before the MAF. Except there was no PCV valve - just a pipe from the rocker cover to just behind the air filter. I sorted that out some time ago by fitting a PCV and routing it to just after the throttle body, and the car ran a lot better because of it.

But still the intake wasn't ideal as there was all sorts of piping adaptors, weird mounting brackets, and a lot of it was held together with cable ties. The air filter was exposed to the elements inside the engine bay and the new K&N filter I bought became a dirty, oily mess within a short time. Also, the intake air temperature sensor was just cable tied on behind the headlights next to the air filter, so probably wasn't able to do its job very well.

Over the last year or so (yes, that long!) I had been looking at what I could do to improve this. I had bought a K&N Apollo closed air intake system and various pipes and silicone hoses. Unfortunately there isn't a lot of room and the K&N Apollo didn't fit very well so I stuck with the original set up.

Recently I looked again and what I could do and came across a closed intake system that looked more compact than the K&N Apollo. It is only a cheap Chinese-made kit and I wasn't thrilled with the idea of fitting it to my car, but at this stage I thought anything would be better than what I have.

So I bought one of these kits and then tried to work out how I could fit it. To fit everything in it needs to be as short as possible, so the original M44 air pipe was too long. I bought a silicone pipe that has the required 89mm (3.5") opening at one end, and a 70mm (2.75") opening at the other end and a 45 degree bend. Unfortunately even this was too long.

However, I had previously bought a short OEM pipe from the US models with traction control, and this turned out to be a reasonable fit. I did have to bend it to a rather uncomfortable angle, but it's the best I could do.

The air filter kit comes with various pipes, adaptors and mounting parts. I was able to secure the filter housing to the power steering reservoir mounting bracket and this holds it all together nicely.

The new filter is mostly quieter than the previous exposed filter, but still makes a lot of noise at full throttle and higher rpms. Hopefully it does a good enough job of filtering the air, and I hope that the sealed system will run a bit cooler and have some positive effects on performance and economy.

Here's some before and after photos. 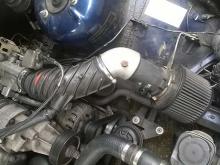 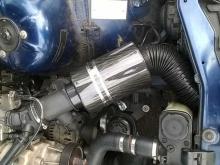 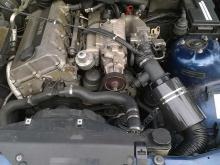