Intermittent loss of power issue with my BMW 318is

I started having some trouble with my supercharged BMW E36 318is a few weeks ago.

Firstly the car smelt strongly of fuel, and then it started losing power or stalling while driving.

I kept a bit of a diary about the problems to help in diagnosis (posted at the end of this entry).

It mostly happened in the first few kilometres of driving and it coincided with some cleaning of my engine bay, so there were suspicions of water damage.

I was able to fix the fuel smell myself, which was only due to a loose hose clamp.

The power loss/stalling issue was not so easy to find. I was working on two lines of thought: fuel pressure problem or electrical issue due to water.

Unfortunately, I don't have a fuel pressure tester so I resorted to just swapping parts and hoping to fix the problem.

Having had a few parts cars in the past I have a reasonable collection of used spares. I tried a fuel pressure regulator and fuel pump, as well as relays and other parts.

However nothing solved or improved the problem, and it got worse. In the mornings the car was hard or impossible to start some days.

In the end I gave up and took it to my mechanic. I don't like to give up on these things but I convinced myself partly because there were a few other issues I'd been waiting to get fixed - things that were easier with the car on a lift or needing special tools.

My mechanic said that the fuel pressure regulators (the DASC supercharger kit has a second one) were both faulty as fuel pressure was half what it should be, and possibly the fuel pump too as pressure was dropping to zero immediately when the engine was switched off.

I bought a replacement for the factory regulator which was fitted, and fuel pressure returned to normal. I still need to test the extra regulator (or is it a FMU?) so I better get myself a fuel pressure tester.

Later I discovered that my mechanic was not testing fuel pressure at the right place. He tested on the return line instead of the supply line. The problem continued and is ongoing.

Monday, 3 April
Noticed there was a strong smell of petrol around the car.

Thursday, 4 April
Washed the engine bay with water and degreaser to clean some oil for registration inspection. I did cover some electrical parts with plastic bags (alternator, coil, fuse box).

Friday, 7 April
In the morning drove 45km to work with no problems.
In the afternoon the car stalled when pulling away from an intersection within 5km, and then at around 7km while driving at around 40km/h it lost power and was unable to accelerate but was able to maintain speed and keep driving up a hill. After 10 seconds it drove normally.

Monday, 10 April
I found a loose hose clamp on a fuel line and tightened that and the fuel smell mostly went away.
I also replaced two rubber fuel lines as they had visible cracks although did not appear to be leaking.
Read the fault codes and an intermittent camshaft position sensor fault was showing so I bought a second-hand genuine sensor and fitted it.
I cleared the fault codes.

The car ran without any problems for the next week or so.
I noticed that the idle was improved too.

Thursday, 20 April
In the morning drove 45km to work with no problems.
In the afternoon at around 2km the car lost power but after 5-10 seconds drove normally and no further problems.
Read the fault codes and the same cam sensor fault was showing.

Monday, 1 May
In the morning drove 45km to work with no problems.
In the afternoon at around 4km the car lost power, made a back-firing noise (banging, popping) from inside the engine bay. I pulled over and switched off the engine. It restarted but was making the same noise. The next restart it ran fine and drove the rest of the way without problem.
I put in a used fuel pressure regulator to see if it made any difference.

Tuesday, 2 May
Car would not start in the morning. Was making the same back-firing type noise from inside the engine bay. I was not able to drive the car to work.
Car started straight away in the afternoon (no throttle).
I put in a spare used fuel pump to see if it made any difference.

Wednesday, 3 May
The car would not start in the morning. I was not able to drive the car to work.
In the afternoon it would not start at first.
I pulled a spark plug and it was wet with petrol.
It eventually started with throttle and ran badly until warmed (would stall if no throttle).
I removed the PCV to check. At first it was not possible to blow through it but after a few attempts it seemed to free up and could blow through it.
I put in a spare used PCV and removed my oil catch can to see if it made any difference.

Thursday, 4 May
The car started first time (no throttle) in the morning.
Idle was not so good when cold but could be due to the used PCV I put in (similar to how it was before I fixed the fuel leak and changed the CPS).
At about 10km, the car lost power and started back-firing. I pulled over and the engine stalled.
The car restarted on the first attempt and drove the rest of the way with no problems.

Wednesday, 10 May
Took the car to a mechanic who incorrectly diagnosed a fuel pressure regulator fault. The part was replaced but the problem continued.
The PCV I put in became blocked and caused bad idle, hard brake pedal. I replaced it with another second-hand one I had which solved those issues.

Friday, 12 May
In the morning, after about 28km the car lost power again. This time worse than usual as it jerked as it lost power. There was backfiring through the exhaust and some through the intake. It sort of kept going and I struggled up a small hill as there was no place to stop then let it idle down the hill and by this time it seemed back to normal. I switched off and restarted to be safe and it drove fine the rest of the way.
I fitted a spare MAF during the day and the car was okay for the 45km trip home in the afternoon.

Monday, 15 May
I replaced spark plug leads (second-hand parts), cleaned the throttle body, cleaned the idle speed valve, and remounted the dipstick tube which was sitting about 1cm above where it should have been causing oil to leak and possibly some vacuum loss.
I took the car for a short test drive and it was okay. Idle was better than ever due to the ISV cleaning.

Tuesday, 16 May
The car started well but in the morning it lost power and there was a small amount of backfiring after around 17km. I pulled over and restarted and it was fine from then on.
However, in the afternoon the car lost power and stalled on many occasions, maybe 10 to 15 times, starting from around 5km and continuing the entire journey.
There was loss of power whilst driving, sometimes followed by stalling, stalling while stopped and some backfiring.

I haven't been game to drive the car since.

Wednesday, 17 May
I fitted a second-hand ignition coil but the car would not start for quite a few attempts. It did start eventually but ran bad and stalled and then would not restart.
I looked at fault codes and the camshaft sensor code was there so I disconnected the sensor and the car started fine.
I reconnected the sensor and the car started fine again, making this inconclusive.
The "112 phase sensor value unplausable" code is now occurring straight away, at idle so should make diagnosis easier.
I'm guessing the sensor I bought is bad or there is a wiring issue or something related.
When I measure the wiring socket both the +12V and GND pins measure short circuit to ground, but with the ignition on I see 12V. I'm not sure if this is normal or there is a short circuit.

Tuesday, 30 May
I bought a second-hand ECU and made some comparison tests. Mine was showing a short circuit where the other one wasn't.
I found someone had previously repaired the ECU and had badly soldered some parts, joining parts that shouldn't have been joined.
I fixed these solder joints and then tried the car, but the camshaft sensor fault code was still there. I suspected that the short-circuit was destroying camshaft sensors, so I ordered another new sensor.

Over the following weeks I noticed that the car still had an intermittent issue where it would hesitate momentarily, usually while accelerating away after slowing or stopping. Although similar to the previous symptoms this is quite minor and has not turned into the same problem of stalling and problematic starting.

It is possible that with all the parts I replaced (I mostly used second-hand parts), such as ignition coil pack, ignition leads, spark plugs, that I might have introduced another fault. I am going to start returning some of the original parts to the car to see if it goes away.

On my way to work, I stopped at a petrol station and at first, it would not start again. I left it a minute and it finally started.

On my way home from work later it started first go but stalled immediately. It would not start again after several attempts but eventually did.

Similar to two years ago, there was a little back-firing which lead me to believe it might be a cam sensor fault again. Although I now carry a lot of tools and spare parts including a cam sensor, I wanted to get the car home to read the fault codes before just guessing at what the problem might be.

The car made it home - around 40km - without any problems.

I read the fault code and it was the same "112 phase sensor value unplausable" so I disconnected the sensor and checked if there was a short-circuit like last time, which there wasn't. So I put in my spare cam sensor and the car started and no further fault codes appeared.

I've now driven it for a couple of days and haven't had any further problems so it appears that the new cam sensor I purchased two years ago might be faulty. Everyone says to only buy genuine sensors but the one I bought was an aftermarket brand (Fuelmiser) so they may be right. The one I put in now was a second-hand genuine one I bought at a self-service wrecking yard.

Yet another follow-up: I experienced a small interruption of power after a week or so and checked for fault codes again. 112 was back! I cleared it but the same code returned each day I checked over the next week. I am hoping this is due to the second-hand sensor I fitted so I went ahead and bought a new BAPMIC brand sensor and fitted it. So far no further error codes. 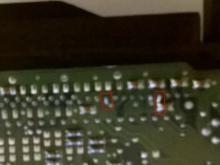