Treated my car to an engine, gearbox and differential oil change

I had been hearing some unusual noise from the rear which I thought might be the differential possibly low on oil.

Also the gearbox sometimes doesn't spring in and out of fifth gear.

First was to change the oil in the diff. You need a 14mm hex driver. As everyone says start on the filler just in case you can't get it off, so you don't get stuck with no oil and no way of refilling. Unless you have a particularly short hex driver you have little chance of fitting a ratchet on the end due to the close proximity of the spare wheel well. So the solution is to use a 14mm spanner to turn it. The drain plug uses the same tool and has no problems with access.

To fill the oil I had read that a hand pump pressure sprayer would work well. It didn't for me. I tried it first with some old oil and took endless pumping and a very long time to move even a tiny amount of oil.

In ended up running a long pipe into the diff filler hole and had a helper pour the oil into a funnel at the end, which was held above the level of the diff. When close to full my helper blew down the house to get all the oil out. I would recommend this method if you have a helper.

Next I did an engine oil change which is simple except the fuel pressure regulator that is part of my supercharger kit gets in the way of the oil filter and makes replacing it harder.

Finally the gearbox oil. The gearbox filler and drain plug both require a 17mm socket and access is good to both the filler (right side of gearbox), and the drain at the bottom.

I used the same method for refilling with oil as I did with the diff.

Onto a test drive and the rear end noise was still there, so maybe the noise is actually the tyres.

The issue with the gearbox appeared to be fixed and everything was running a bit quieter than before.

The next day when driving to work I could not hear the noise from the rear so much, but the gearbox, although it feels smoother, still sometimes loses the springing in and out of fifth gear.

I'll see how it goes after some more driving. 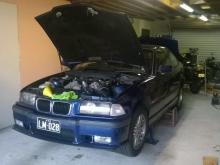 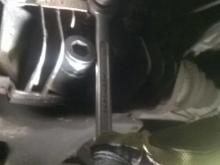 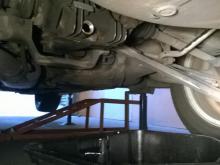