I noticed the other day that my radiator expansion tank was empty so filled it up and the next time I drove the car it was empty again.

I had a look for leaks and found a trail of coolant under the expansion tank.

Just as well as when I started disassembly I found that the car still has the original radiator from 1998!

Removing the radiator on the four cylinder manual models is very easy.

1) Remove the plastic tray on top of the radiator. This is held on by four Phillips head screws and two plastic screws which are also Phillips.

2) Unplug and then remove the electric fan. Held on by two 8mm screws near the top on the back of the radiator.

3) Remove the two plastic radiator clips on the top. These appear difficult to remove but I found that if you push a flat screw driver down the hole in the middle they then hinge open. See my photos.

4) Then it's a matter of removing the temperature sensor and the three hoses.

5) Then reverse the procedure for installation.

The cooling system needs to be refilled and bled. I've always found bleeding these engines difficult but I have read that if the front of the car is lifted it is easier. 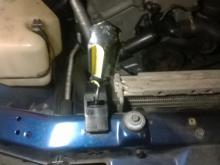 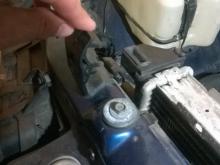 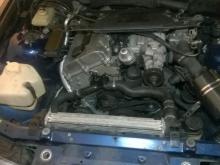 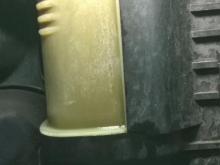