The passenger door has been difficult to open from the outside for a long time now. Sometimes it would only open if you pushed against the door.

But it wouldn't open at all the other day, and the driver's door was also becoming a little difficult to open so I thought I better do something about it before I couldn't get into my car at all.

I did a bit of research and I thought I had a broken outside door handle but then I came across a YouTube video where some guy found that his problem was caused by the door latch and just needed some care, rather than replacement parts.

I tried some WD40 in my passenger door latch and it started showing some signs of improvement. After a bit of time and a lot of WD40 it was opening like new!

I did the same on the driver's side and watched as it slowly started freeing up.

WD40 send to work well, although I don't know how long for. I sprayed from all angles and used a screwdriver to push the locking parts in and then operated the door handles repeatedly to work the fluid into the mechanism. 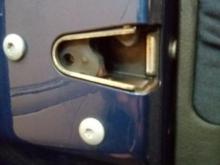 After a few weeks one of my doors started getting a bit sticky again. I think that WD40 is not the best choice for this and it would be better to somehow grease this mechanism. It may need to be removed from the door to do this - I'm not sure as I haven't tried it yet - I just sprayed more WD40 in there :)