I bought a set of new DBA 4000 series heavy duty rotors and Bendix Euro+ pads for the front of my BMW E36.

After a month or two I started feeling vibration under braking, which progressively got worse over the following months and is now really bad.

I noticed that the rotors are covered in spots.

I did a little online research and it is likely the marks are pad material building up on the rotors. Some suggested sanding it down or doing some sharp hard braking.

I tried both and both resulted in noticeable improvement but it didn't take long for it to worsen again.

I sent Bendix a photo and asked for their advice.

They said that it was pad material on the rotors but that was cosmetic only and would not cause any vibration, and the most likely cause was sticking caliper slides.

DBA's website has some technical information on this issue and says that a build up of pad material on the rotor WILL cause vibration.

DBA also have special heat sensitive paint on the rotors which permanently changes colour when certain temperatures are exceeded. On mine, none of the paint has changed colours so they have not been overheated.

I don't know the cause of the problem but I would be wary of using Euro+ pads. 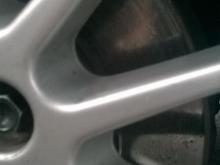