I bought the cheapest brake rotors on eBay

I know people say you shouldn't skimp on something as important as brake parts, but I had already bought a set of reputedly good quality DBA HD rotors hoping to fix a break vibration issue on my 1998 BMW 318is, and after a month or two I started experiencing vibration under braking again. So I was reluctant to spend more money on this problem.

Now I'm not blaming the rotors. It could have been due to my driving, improper installation, the brake pads (Bendix Euro+) or one or more of a million other possible contributing factors.

I thought hard about what to do about the vibration. I could have got the rotors machined but I checked a few places and the cost of that is not far short of what I paid for the rotors in the first place.

I decided to just get the cheapest set of rotors I could find and not change the pads as they are close to new. Worst case would be that I spend a little money and end up having to change them again in the near future. Actually when it comes to brakes, the worst case is far worse.

So I bought an unidentified brand on eBay for about A$75, extra cheap because I waited for eBay to have one of their occasional extra discount offers.

They arrived promptly by post with only cardboard around them, but no obvious damage if they were dropped or mistreated in transit.

The rotors themselves had no identification of brand or country of origin, but the box said Reliance Spare Parts. A little googling says that this brand is owned by Queensland Power Brakes who appear to be, or have been, in receivership. Maybe that's why they were the cheapest. There's no mention of the country where they we made but I think we can all guess that it is probably China.

The rotors appear good quality. They have a nice machined finish. They don't have the same feature as the DBAs which resist rust in the hub area of the rotor, so they might not look so nice after a little while.

I had no problems fitting them and I did a bed-in process that I found online from another rotor manufacturer.

So far no vibration under braking but I'm hoping the brake performance improves as they don't feel as powerful as they were. I expect this is due to the pads having to wear to the profile of the new rotors as I can see only a small part of the rotor showing wear so far (about 100 km only). I guess this is why people recommend to change pads at the same time as replacing rotors.

I'll report back later with how they go after some more miles. 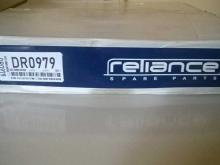 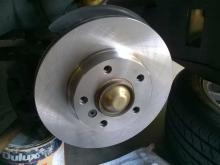 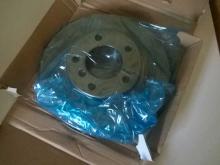 Like Watch Report
Previous post: Airbag warning light on intermittently
Next post: I installed an eBay short shifter on my BMW 318is and I hate it

Update: After a few thousand kilometres I have no complaints about the rotors. Braking performance has improved as the pads have worn to the rotors. I feel a little vibration under braking, but it is very minor.

The rotors have a little surface rust but still look fine. 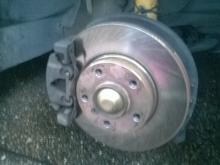 Update: Just noticed today that the rotors are now pretty rusty and unattractive. I guess rotors with protection against corrosion might be worth the extra outlay if this bothers you. They are still working fine though! 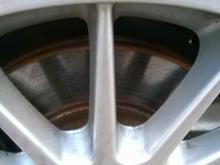