An example of over-pricing, poor descriptions and selling an unregistered vehicle

We've posted elsewhere about the importance of not over-pricing, good descriptions, and also how hard it can be to sell an unregistered car. Over the last month we've watched a good example of someone who got it wrong.

Unfortunately the car had suffered a blown head gasket, but was still registered and drive-able, and the seller was wanting to selling as-is.

First mistake the seller made was the price. They started out at $3,500 which is too much given the car probably needs at least $2,500 in repairs. The only people willing to buy a car that needs major repairs want to buy them real cheap so it makes it worthwhile.

Second mistake was the description. They didn't make any mention of it being a T5 and the only way anyone would know was by wading through the specifications or spotting the tiny badge in the photos. They also stated that it could be repaired for a "minor cost". Anyone who has had a head gasket replaced knows otherwise, and how the price adds up because you may as well change a bunch of other parts while you are in there.

The last mistake was letting the car run out of registration before they dropped to a more appropriate price. Over the next few weeks we watched as the seller dropped their asking price first to $3,000, then to $2,000 and today they dropped to $1,200 or best offer. Over this time the car went from being easily transportable to unregistered and requiring towing.

Had they asked for around $2,000 at the beginning and listened to offers they might have found it much easier to sell. We would be surprised if they didn't get offers early on for what they are asking for now and are probably kicking themselves.

This example highlights the difficulty of selling cars that need major repairs. Our advice in this case is to weigh up whether it is worthwhile to get the car repaired yourself and sell as a running vehicle, or price the vehicle cheap enough to make it worthwhile for someone to take on the repairs instead. 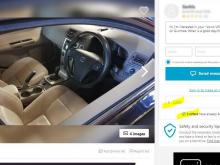