There's an uncommon BMW model that I've been watching on the used car market for some time and it's a good example of the importance of researching the market value when listing a used car for sale - and knowing when to drop your price.

It was available in automatic and manual, and there was the option of an "M Sport" package which included a sports body kit and sports seats among other options.

To BMW enthusiasts, a manual with the M Sport kit is very desirable, despite this car coming only with the smallest 6-cylinder engine BMW offered on the E46 series (2.2-litre).

While these two cars have been advertised I've seen far more desireable versions advertised and sold that were listed for a fraction of the price.

For the price these two cars are listed at you could actually get a much newer E91 3-series wagon with much lower mileage. For example, there is a manual 2007 323i with the M Sport option listed for $12,000 at a dealer, and there are 4-cylinder models starting at around $7,500.

The takeaways from this is that it is important to research what similar models are selling for before you list your car for sale. Low mileage can get you a better price but doesn't justify a price two or three times what others are selling for.

Keep in mind that some buyers use the search alerts provided by popular classifieds websites to get notified of when cars get listed, so if you start with a high price and then later reduce it, these buyers may never know. You only get one chance to make a first impression. But if you do a significant price reduction, consider relisting rather than changing your advertisement.

And if you don't get any serious interest in the first week, then there is something wrong. You need to investigate why... Are your advertisements not getting seen or have you priced too high? 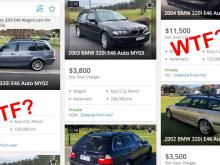 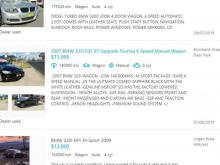