Selling tips: why are you selling your car?

We have seen some strange reasons for selling listed in used car advertisements. Here's a couple of our favourites...

"I just purchased the car for my partner but she can't drive a manual so its reason for sale (sic)..."
- Not sure how well they know their partner to have bought it in the first place!

"Selling due to having 3 cars and no parking space."
- So this is the worst of the three? Next!

When selling a used car it's likely that you are going to be asked why you are selling. What should you say?

Our advice is to be prepared and be honest... kind of.

If your reason for selling is that the car is unreliable then you might want to describe this as you are wanting to upgrade to a newer car.

If the car has a major fault and that is the reason you are selling then it may be a good idea to disclose this is. In some cases, if the seller asked about faults and you did not disclose the fault, and they can later prove that you were aware of the fault, then they may have some legal recourse.

Most buyers realise that cars are sold as the owner wants to upgrade to a better car, whether it be newer or just more reliable. The smarter ones also know that chances are that a used car is going to have some issues that they might not find until after they have bought.

And should you include the reason in your advertising?

Our opinion is that there isn't much point in mentioning the reason in your advertising.

Whatever you write is going to be open to interpretation, and often people will err on the negative side.

Here are some of the common reasons we see and what we think about them:

Selling as moving overseas: Here's my chance to get a bargain!

Selling as moving interstate: Car can't be that good if it's not worth taking with you?

Selling due to loss of license: The car has been trashed by a hoon!

No longer needed due to company car: Sounds like a good reason.

Selling due to upgrade: Sounds like I am getting second best.

Selling due to too many cars: So this is the worst one?

Selling as we don't drive it much: Is that because it's too unreliable?

Genuine reason for sale: What the hell does that mean? 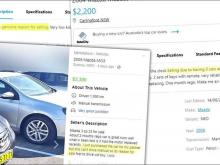