In the early 2000's both Holden and Ford were furiously working on new models to get their piece of the growing crossover market.

Holden invested $125 million on developing their challenger and were first to the market with the release of the Adventra in October 2003.

Ford spent $500 million on the Territory which they introduced a few months later in April 2004.

The Adventra was a lifted VY Commodore wagon with all wheel drive, and was initially available with a 5.7-litre V8 engine only.

The Territory was built on the same platform as the BA Ford Falcon but was a new traditional SUV-style design. It was offered as rear wheel drive or all wheel drive and with a 4.0-lite six cylinder engine. No V8 was offered.

Things did not get any better for Holden, even with the VZ series update in 2005 when they were finally able to provide a six cylinder engine option for the Adventra.

Unfortunately it was too little too late and the model was phased out in 2006 to make way for the Captiva, a more conventional SUV.

The Territory continued to sell well and underwent several model updates, Ford even adding a diesel engine option to the line-up in 2011.

It continued on to 2016 when local production ended of both the Territory and the Falcon.

It seemed Aussie families wanted their crossover vehicle to look like a SUV, and they didn't care so much about a V8 engine or even all wheel drive. 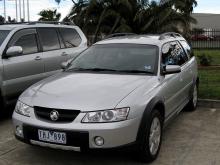 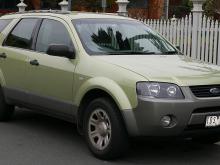