Why are people still trying to sell their recalled BMWs?

Given that BMW has recalled a significant amount of the late 1990s/early 2000s 3-Series (E46), it surprises us that there are still many for sale.

We decided to do a random check on cars currently for sale to see if any were affected by the Takata airbag recalls.

It didn't take long to find one affected – in fact, it was the first one we checked. We went on to find a significant proportion affected by an early recall relating to passenger airbags that were replaced with temporary parts that BMW need to recheck after January 2019.

We also found some cars that hadn't had the passenger airbag recall done at all and some affected by the more recent driver-side airbag recall.

Because replacement airbags are not available, and it may be 18-months before they are, BMW are offering to buy back affected cars at market value.

It has been hard to find out what BMW is offering but we did hear of one owner who accepted a price of $3,000 for an early 318i, although that involved a little negotiation.

It surprises us that people trying to sell their cars – particularly the cheaper ones like a 2000 323i coupe that is offered for sale at $2,800 and is subject to the recall and a "stop driving immediately" warning – aren't taking advantage of BMW's offer.

Maybe they don't know about the recall, but surely BMW have been in touch with all registered car owners.

Is there money to be made buying affected cars and selling them to BMW we wonder? 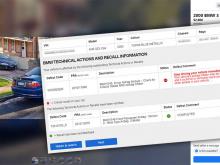 Update: How much are BMW paying to buy back affected cars?

Some people have been told BMW is using Redbook prices to value cars.

Although a lot of owners are unhappy with the amount BMW is offering, some of the prices that we have seen sound very reasonable to us: $2,500 to $4,000, even for an entry-level 318i.

We also thought that BMW was offering a loan car at their expense for owners who wanted to wait for replacement airbags to become available but have since heard that the offer might only be for one month. If you go with this option, note that you will be liable for the excess should you be involved in an at-fault accident which will vary with different rental companies but could be $1,500 or more.